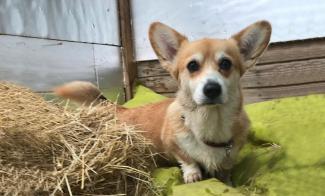 Separation anxiety in dogs and puppies

Separation anxiety is a behavioral disorder that manifests itself in signs of distress when a dog is separated from his owners or people to whom he is very attached. This is one of the most difficult behavioral issues to resolve and the second most common reason for behavior therapy. As with other behavioral problems, prevention is far better than cure.

How does separation anxiety manifest itself?

When owners are away

As soon as his owners leave, the dog destroys everything he can, he barks, whines, howls! He can even get messy and defecate around the house. They are also generally anxious dogs who frequently engage in activities such as excessive paw licking for example.

When owners are home

When the owners are present, they are very "clingy" dogs, who are always with their owners and who constantly ask for little attentions. If you find that your dog is following you everywhere, as soon as you get up, he may be suffering from separation anxiety.

During walks, these are dogs who do not stray too far from their owners and always need eye contact with them.

What is the origin of separation anxiety?

For dogs adopted from shelters, the anxiety can be severe and stems from the fact that they have been abandoned by their previous owner, or the whole family, and they are simply afraid it will happen again. These dogs are particularly clingy and very anxious when they don't see their new owner.

As young puppies, they are totally dependent on maternal care during the first weeks of their life. Attachment is a calming bond that binds the dog to a particular being. It starts with the mother, then with the owner or family.

From an early age, the mother teaches her puppies to gradually detach from her. She no longer responds to all their requests, demands that they sleep further away from her, pushes them away if they sticks to her. Thus, at puberty, the puppies are permanently detached and live their adult life, within the hierarchy established in the family system.

Upon arrival in a new home, the puppy quickly becomes attached to one or more individuals. Owners often make the mistake of making too much fuss of the puppy. They pet and cuddle him as soon as the puppy calls out, let him follow them everywhere, and allow him to be in situations of dominance, such as letting him eat first and accepting that he sleeps high up on the sofa, on the bed, usually out of fear of upsetting him.

However, this can have consequences for the future life with their puppy. They do not perform the detachment necessary for the independence of the young dog as his mother would have. Therefore, when the dog then sees his owner leave, he becomes very anxious and manifests his distress by destroying and barking or whining.

Certain behaviors of the owner promote this anxiety such as the rituals of departure and those of return.
When the owner leaves, he tries to reassure his dog, talk to him, explain to him that he is not going to be away for long. All this ritual makes the dog anxious because he quickly understands that all these signs precede the departure of his owner. So the dog's anxiety increases the more he sees his owner lacing his shoes, taking his coat, waving the keys. All of these rituals ultimately result in stressing the dog even more and speeding up the process instead of reversing it.

Likewise, the return ritual is also a problem. As the owner feels guilty for having left his dog, he makes a fuss and responds to his requests and the dog therefore associates the return of his owner with appeasement. If the dog has damaged the house, we tend to scold him, which is wrong, as a dog only understands that he has done wrong when he is told off on the spot. Telling him of two hours later is useless and only reinforces his anxiety. When returning home, keep calm, ignore the dog, send him to lie down gently in his basket and clean up the mess (but not in front of him).

What to do if your dog has separation anxiety?

If your dog is already anxious when you are away, you have to gradually teach him to be independent from you:

When this is not enough or the barking of the dog is a problem with the neighbours, you may need to call a dog behaviorist, and possibly even a vet if anxiety medication is needed.